For 4000 years we designed, draped and dressed differently. And suddenly 300 years of colonization and globalization changed everything. Not really. Beyond the glitz and glamour of high streets and fashion weeks, and closer to the homes, festivals and temples of India, the different hues, fabrics and materials form a distinct and dominant sense of fashion that thrives in the Indian heartland. Future Ideas explores some of the Indian fashion cues that can form the basis of building large fashion brands in the country.

India has always dressed uniquely. We have a deep cultural legacy and a distinct sense of aesthetics that comes from different regions, indigenous crafts and religious beliefs. Clothing and textiles gave us the sense of origin and ethnicity. From region to region, village-to-village, from one community to another, from tribe to tribe-to-tribe our dressing was individualistic and served as a canvas that reflected our beliefs, religion and customs.

However things began to change forever when the British happened to India. The British introduced us to education, the English language, machinery, jobs as clerks and executives and thus in turn they also taught us how to dress. They decided what was considered appropriate and by whom. The unstitched garment of India, the dhoti gave way to pants, safari suits. The dhoti ensured that the legs were tied together whereas the pants gave freedom of movement to the legs. While the men were the early adopters of the new simplified way of dressing as prescribed by the British, the women held fort and kept the old traditions alive by what they wore at home.

The British and the industrial revolution forever changed our intrinsic sense of fashion. It simplified our dressing and built homogeneous codes of fashion. They gave us codes that were global and we as a nation today are moving to western codes of dressing. While the British were able to transform the way men dressed the women held fort. Even today women’s fashion has much heterogeneity as they still retain certain beliefs around the way they dress. Come festivals, weddings, other important life-cycle stage events Indians even today go back to ancient customs, beliefs and myths. We have a deep sense of auspiciousness; colours find their relevance even today in life-cycle events (marriage, death), rites of passage events like thread ceremony etc and in all forms of exchanges around giving and gifting.

Many examples can be seen of how religious beliefs and communities frame distinct beliefs, customs especially around colour. For example although white is associated with peace, clean, pious, and, virginity, it is not a preferred color for young and married except on a Margarshirsh Thursday and Shravan Monday’s. While white is not considered auspicious for most communities for marriage Christians and Neo Buddhists wear white during their weddings. Amongst the Mangalorean Christians, the white gown is changed into Red and gold bordered attire post nuptials. While for a large part of India, red is the colour that signifies marital status, for the Maharashtrians the sign of being a suhaagan (or married) is expressed through a green color sari. While black as a colour is associated with mourning, it is yet worn by the Maharastrian Hindus during Makar Sankranti (14th Jan) by women, since that’s the color of the sky at night. A black outfit or traditionally a sari is gifted to a newly married woman in the first year of marriage for her parents. Yellow is the colour for Saraswati puja for Bengali’s and for Punjabi’s Baisakhi.

India also has its own rhythm of consuming fashion. The Marwadi’s would wear new outfits for Dhanteras, the Jains for Paryushan, the Kannadigas for Kola, the Bengalis for Durga Pujo and the Malyalee head of the family gifts every family members new clothes on Vishu. Muslims visiting Haj are gifted clothes by relatives and friends. The crafts too were an outcome of various beliefs of communities. For example the Banjara tribes of Gujarat, Rajasthan and Andhra Pradesh embroider using glass or mica cut into different shapes. These slightly convex glasses were thought to ward off evil spirits. Bandhani symbolizes married life and is a must in marriages of Hindus and Muslims of Kutch. Women from the Bishnoi community wear veils that have red base with black dots, and black edges. Young mothers to denote the newborn is male wear yellow veils with red dots.

Hence one cannot help but wonder, how marketers, brand thinkers and designers should think fashion for India. Can we as Indians build and evolve this rich heritage, culture and fashion traditions to build the Indian idiom of fashion? Can we create modern day myths around fashion? Auspicious colour for dating, prosperous colours for shopping trips, season launches around festivals and clothing that celebrates and recognizes the diverse traditions and beliefs of many Indians. 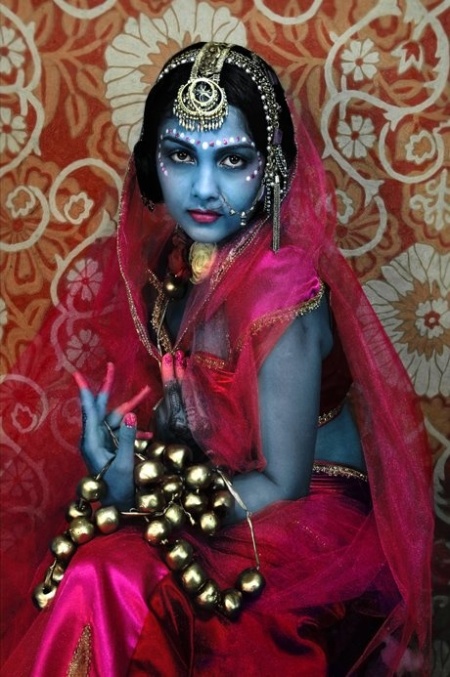